Once upon a time, there was a little dachshund named Vinny. Vinny's family called Dachshund Rescue of Bucks County & NJ one day and said they could no longer care for him. Vinny was sad. He didn't know a lot about how the world worked, and he had been to a lot of houses and met a lot of people, not all of whom were nice to him. What would this change in his life bring? Vinny was scared.

One day after what seemed like a very long car ride, Vinny arrived at the foster care place. It was late, and even though Vinny had not eaten that day, he was too afraid to have dinner. There were other doxies at the foster place, but Vinny was too frightened to make any friends that night. Still, there was this nice lady that zoomed around and gave out love to everyone… hmmm, maybe this wouldn't be so bad.

The next day, Vinny got examined. He was not neutered and needed lots of vaccinations. Yuk. Even worse, he had to drink some banana-flavored liquid to make sure he didn't have any bugs crawling around on his insides. He had never been through that before. Not fun, he thought. He liked his neuter even less. Still, there was this nice lady that zoomed around and gave out love to everyone…hmmm, maybe this wouldn't be so bad. Where did she go? "I know!" thought Vinny. I will cry, and she will come to help me. He did, and she came! Would she always come if Vinny cried? Only one way to find out, he thought.

Then Vinny took his experiment too far. Once, Vinny stayed up all night and called his foster Mom, and she came to him each time, but after a few days of this routine, she was not as happy as she had first been to see him. I will try harder, thought Vinny. "This can work!" he told his foster brothers and sisters; "I can sleep in the day and call out to Mom for us all night." And he did. Night after night, day after day, Vinny cried for love until one day Vinny's day became night and his night became day. It was not a good thing.

Everyone at the rescue was worried. Vinny would never find a forever home if he could not overcome his issues. What to do, what to do…then the answer came to them. 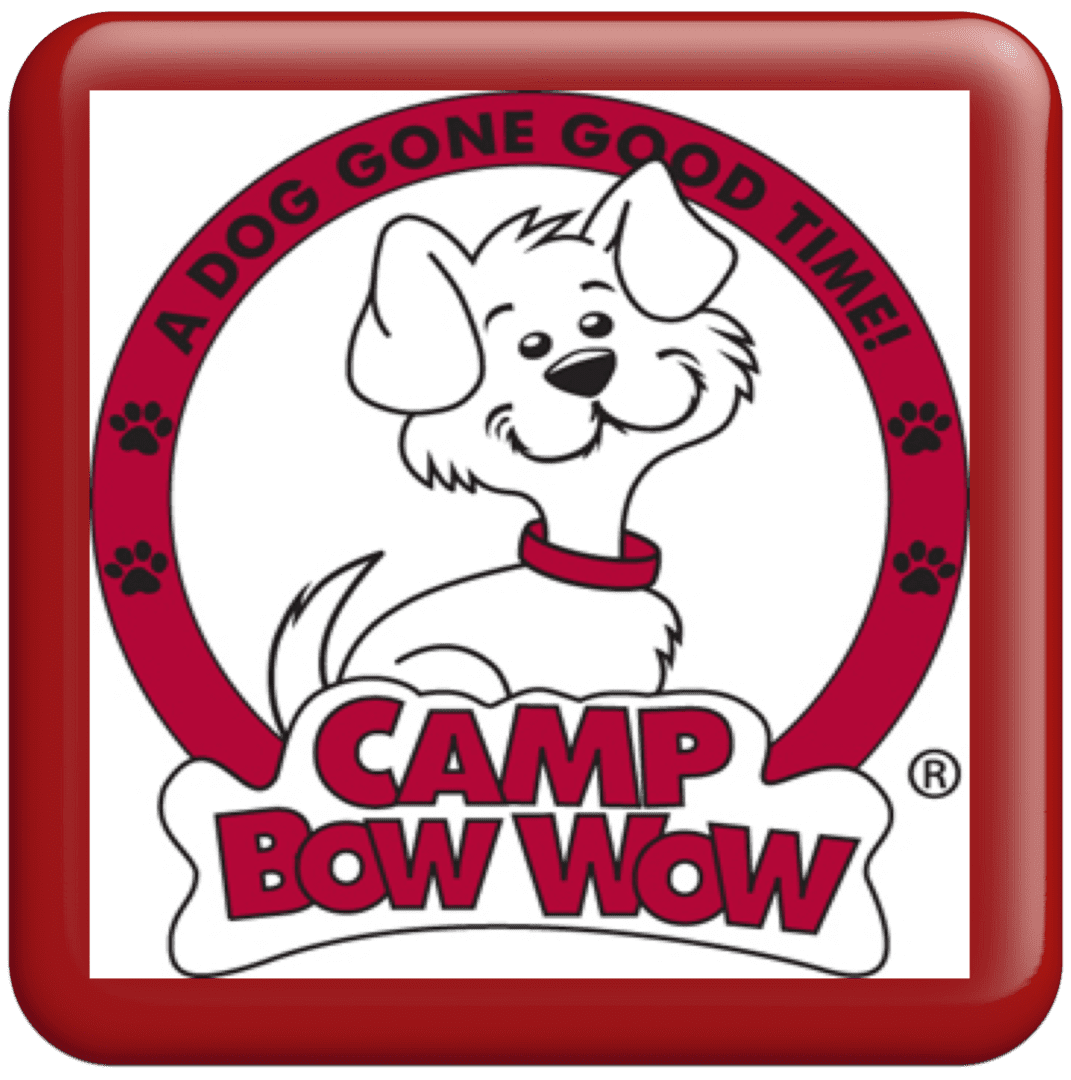 Camp Bow Wow, well, of course, why hadn't they thought of that sooner? A few days later, Vinny went for his official camp interview. He was a little nervous. He looked for a bow tie; after all, he wanted to look his best, but the people who run Camp Bow Wow said that wasn't necessary. Instead, they asked if Vinny had a 'breakaway collar.' Well, actually, he had several. Vinny studied his collars with a careful eye and chose the striped purple one; it looked really good with his black coat, hey what didn't?!. A quick brush of his coat and he was off to the interview. "Wish me luck, everybody!", said Vinny and they all did.

Vinny was right on time to meet with the Camp Bow Wow Team. He wanted to make a good first impression. There were some necessary forms to fill out, but Vinny had no trouble with any of the information they needed. Best of all, he had the right vaccinations to get into the program; "maybe those needles weren't so bad after all," he thought.

Now it was Vinny's time to shine. Tail wagging, he was ready to start his new adventure. He was ready for a good nap and hoped they had some soft blankets for him to sleep the day away on, but he was wrong. "Wait a minute," he said, "you don't get it...I sleep all day so I can call to my foster Mom all night". "Yes, we heard about that," said the nice lady with the red sweatshirt.  "We have some other things planned for today Vinny." "Uh-oh," thought Vinny..." I want to go home." The camper lady was very nice but very firm with Vinny, and off they went to the interview.

"Now what?" thought Vinny. "This is a bad idea," he mumbled. His tail was down, and he had it between his legs. "No matter what, I am not going to like this," he told himself. A few seconds later, the door opened, and a buff-colored dog just a little bigger than Vinny came into the room. "Hi, Vinny! I am Elliot, and I am a camper here. I am going to do your interview!" And so the meeting with the two boys began. Before too long, they were playing together and running around the interview room. Then came the good news: "You passed, Vinny!" said the camper lady in the red sweatshirt. "Wow, that wasn't as bad as I thought it would be," said Vinny, "maybe this is a good idea."

While they were getting to know each other, Elliot told Vinny how great camp and the counselors were. He explained that all the dogs have fun as they:

Click here to watch Vinny and his camp buddies at Camp Bow Wow! 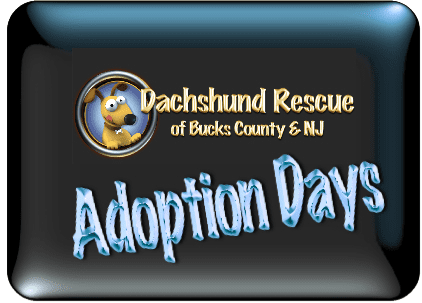 Back at the rescue, work was underway to find Vinny the perfect home. Vinny needed someone that would love him and make sure he got the support and continued training he began at Camp Bow Wow. This would have to be one very special family...everyone at the rescue wondered if those special people even existed. No worries! They did!

One Saturday, a really cool family came to the Meet-N-Greet on the DRBC Adoption Days "OK, Vinny, let's go! It may be your turn today!" said his foster Mom. "I don't know," thought Vinny, "I don't like change." "No pressure, Vinny," said his Foster Mom, "just come and see if you can have fun with these nice folks." "Well, OK, but only to make you happy, Mom," said Vinny, and out the door, he went.

It was a really nice day, and out in the yard, Vinny saw that there was another dachshund. He was red, and he had a neat looking harness. Vinny walked over to meet him and remembered his manners from Camp Bow Wow: always wait for new guys to get to know you before you get right up in their face. The new guy was named Bacon, and he came right over to meet Vinny. "Hi, my name is Vinny," he said. "Oh hi, I am Bacon," he said. "Are you new here?" Vinny asked. "I don't know," said Bacon, "What is this place?" "This is foster care. Everyone here is looking for a new family," stated Vinny. "I came here with my Mom and Dad; they love me very much. I don't think I am here to turn them into rescue," said Bacon. "Are you the new brother they told me about?" he asked. "Are you are kidding me?" questioned Vinny, "Gee, I hope so," he said excitedly.

Vinny and his new brother went all over the yard. It was important because the new house had a big yard. They both did just fine. Then Vinny came over and spent time with his new Mom and Dad. They held Vinny close and told him what a great guy he was. Vinny gave them kisses. The people from the rescue told them all about Vinny's problem with night and day and his adventures with his friends at Camp Bow Wow. The new Mom held Vinny in her arms and asked Vinny if he wouldn't mind sleeping in the bed with her so he would not be afraid in the night; Vinny thought that would be just fine. The Dad told Vinny that he would love to work with him on his training man-to-man, making Vinny feel very grown up and proud. Bacon sat next to him and told Vinny that it would be really cool to have a little brother like him. And then it happened, Vinny found a new forever family!

Fairy tales do come true. They certainly did for Vinny, thanks to the DRBC Foster Team's great efforts and their very special friends at Camp Bow Wow. Not only did Vinny have a great time at Camp Bow Wow, but he learned the difference between day and night. His focus level improved, and home training got easier.

DRBC thanks everyone at Camp Bow Wow for all the help they provided this special little dachshund, our Vinny. Your dog may not have the problems Vinny did, but socialization is a key component of every dog's life. They understand and foster this concept at Camp Bow Wow. Click on the banner below or any other links on this page to learn more about this exciting place for your doxie!